Although the game was founded in Dublin in 1904, it did not make its mark in the North Monaghan area until the 1930’s when a number of teams sprang up throughout the parish, including Goland, Moybridge, Mullan Mill, Carrickroe, Ballyoisin Clara and Glenmore.

By the mid thirties, Clara and Glenmore amalgamated to form the first Truagh team which included Mary Treanor, Annie Treanor, Cassie Treanor and Bridget Mc. Kenna together with the following in the photograph:- Back row L-R. Dympna Finnegan,Bernadette Sherry, Teasie Sherry, Cassie Smyth, Cassie Sherry, Aggie Mc. Kenna, Mary Mullan. Front row:- Ellen Treanor, Maggie Sherry, Lily Mc. Kenna, Rose Mullan and Winnie Finnegan. They wore black gymslips , white blouses and black tights and their first match was against Blackstaff, whom they defeated. There was a tremendous interest in camogie at that time where hundreds of spectators would enjoy the matches. 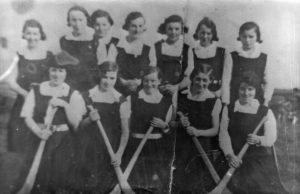 Due to emigration the game lapsed for a number of years but revived in the mid 40’s under the guidance of James Travers who once again formed various teams in the parish. Carrickroe dominated the camogie scene where John Mc. Kenna and Master Smyth led this team to victory when they won the Co. Championship for three years in succession .

The game once again fell dormant until 1963 when Fr. Peter Mc. Guinness , a curate in Clara seen the need for a girls sport in the area and got camogie up and running in Killybrone and Amackalin National Schools and within a short time, together with girls from the area and a few from Augher, a Truagh team affiliated to the Monaghan County Board. Their uniform consisted of a green gymslip, black blouse and black tights. They practiced in “Peter Oiney’s Field “and had their first victory in the Augher tournament. Pat “Crock” Mc. Quaid provided transport to the various matches throughout the County oftentimes very slow!!! where on the odd occasion the team had to forego the match due to late arrival Maura Mc.Elwaine and Della Skinnader who were part of the team also played for the County and Ulster. 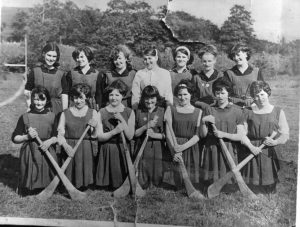 By 1979 after a lapse of a few years camogie was fostered again when Geraldine Treanor, Bridie Sherry and Maretta Sherry decided to rekindle the sport. A meeting was called with a good response and Fr. Peter Corrigan was elected Chairperson. It was decided to organise a bazaar in Carrickroe Hall in order to purchase sticks, sliothers and uniforms for the team. This time they went with the colours of the football club, red tops and black skirts. The footballers kindly let them use the field they had rented from the Corrigan family in Fortsingleton . 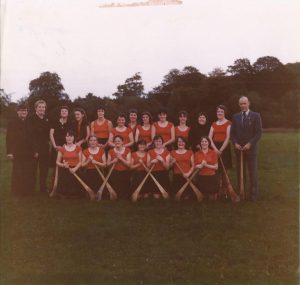 Off the pitch Mary Flood represented her club, and County when she won an All Ireland medal for recitation in the Ceol, Caint agus Damhsa competition in 1984 and again in 1988. 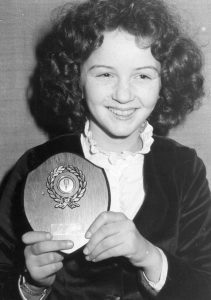 The success of the club spurred Breda Goodwin the teacher in Clara school to invite Maretta Sherry to coach the sport in the school, and with a determined bunch , won the Primary School Final, two years in succession. 1981 and ’82 They went on to reach the Ulster final of the Community games that same year. 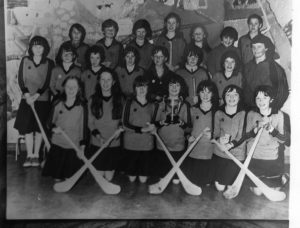 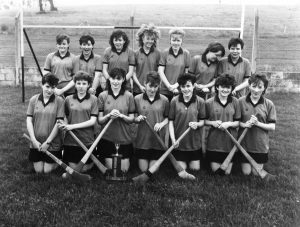 By 1994 sixty juveniles had registered with the club. Imelda Mc Quillan, Eilish Treanor and Joanne Sherry guided The U14 team to reach the Final of the Midlands Feile in 1997.

The Senior squad claimed the Senior League title defeating Castleblayney in ’98 and ‘99. 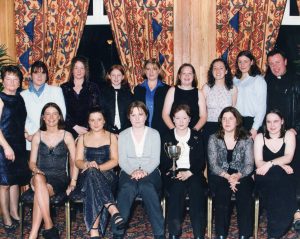 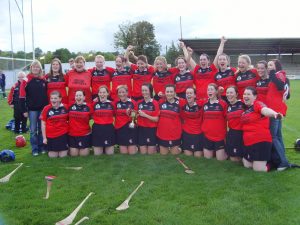 Five of the team namely, Siobhan Mc. Kenna, Eilish Mc. Carron and Maired Mc. Carron, Paula Mc. Quillan and Sharon Mc. Quillan gained All Ireland medals when they lined out with the Div. 4 County Team in 2006 and together with Orla Sheerin claimed all victory when Monaghan were allowed participate in 2007.

Mairead Mc. Carron added an Ulster Minor B medal to her collection in 2002 and represented Ireland in the Shinty Competition in 2006 and 2007. Orla Sheerin made her debut on the Ireland team which was played in Kilkenny in 2008 Sharon Mc. Quillan made history in 2009 when she returned with a medal from the Shinty competition in Scotland. 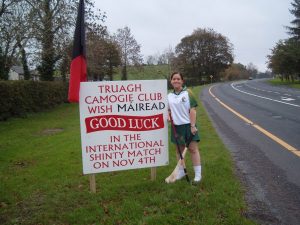 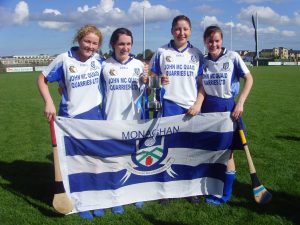 Siobhan Mc. Kenna , was among 24 County representatives who received presentations for “Player of the Decade” from Uachtaran Cumann Camogaiochta, Aileen Lawlor at a special function in Croke Park on Camogie All Ireland Day in 2014. The Camogie Association launched “ Player of the Decade” to coincide with the 110th anniversary celebrations of Camogie (1904 to 2014 .

Unfortunately emigration and motherhood took its toll on the Club in 2014 when they were forced to withdraw from competition.