Truagh Gaels played their first league game against Scotstown in March 1958. Shanco Park was the venue and the newly formed Gaels defeated their more fancied rivals by a point. However Junior Football proved to be a tough nut to crack and success was proving to difficult to achieve. In 1961 a new curate, Fr. Marron R.I.P., came to Carrickroe. He had a keen interest in Gaelic Games and under his tutelage an U-16 team was fielded in 1961. This was the start of juvenile football in the parish and was one of the most important developments in the club. Fr. Marron R.I.P. was joined by Brendan Landers R.I.P, Packie Deery R.I.P, Jimmy Treanor R.I.P and others in the organisation of juvenile and minor affairs over the following years.

Despite all the effort at junior and minor level, our first success was the capture of the McGrane Cup in 1967 at U-14 level. Our juvenile, minor and junior teams were now competing with more success and confidence. In 1969 our U-14s captured the McGrane Cup for the second time. 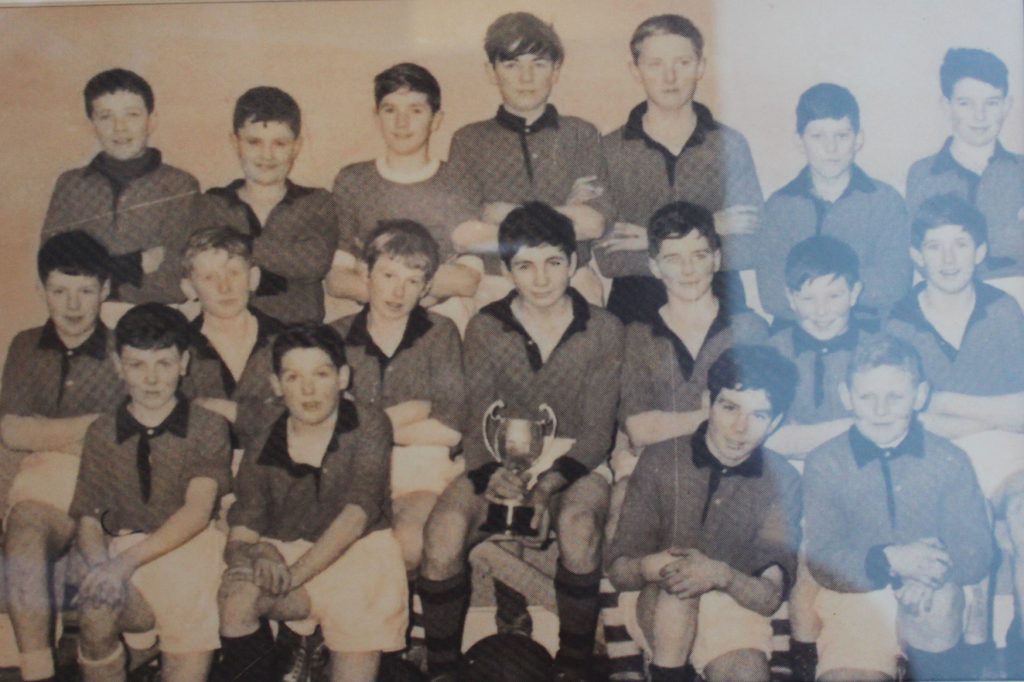 The groundwork done in the 60’s paved the way for a decade of success in the 70’s. In 1970 our third juvenile title was achieved when our U-16 won the Murray Cup (Div 1). The Junior League was won in 1970 and the Junior Championship was attained in 1971. These years were marked by some great games between ourselves and our neighbours Tyholland. In 1972 the Intermediate League was won and we were now in Senior Football. 1973 and 1974 Truagh Gaels reached the semi-final of the Senior Championship losing to Castleblayney and narrowly to Scotstown respectively. In 1975 our first and only Senior Silverware to date was attained when Truagh defeated Scotstown to win the Owen Ward Cup (Senior League). This game was played in 1976, 18 years after the club’s foundation. For the rest of the decade we held our own in senior ranks. Other notable successes on the field was the winning of the Brennan Cup (Junior B League) in 1977 and a talented minor team who were defeated in a minor league final after three titanic battles against Scotstown. 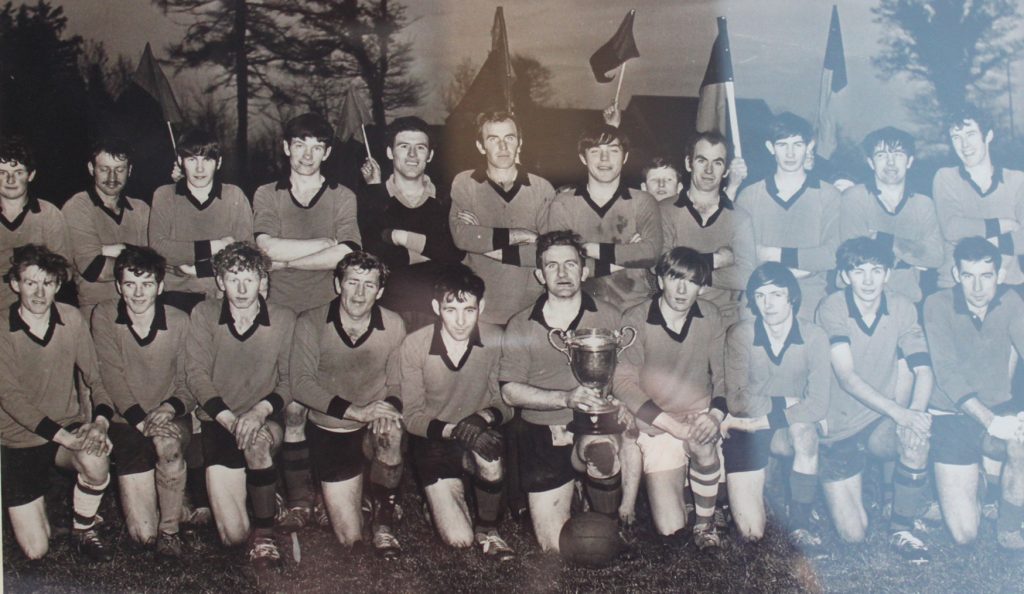 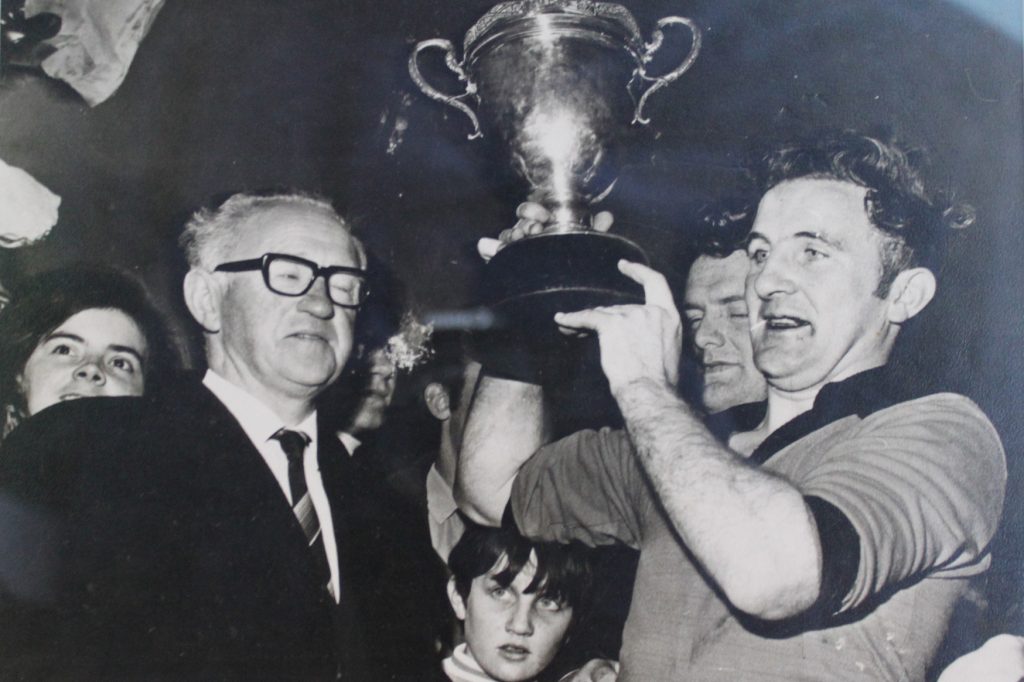 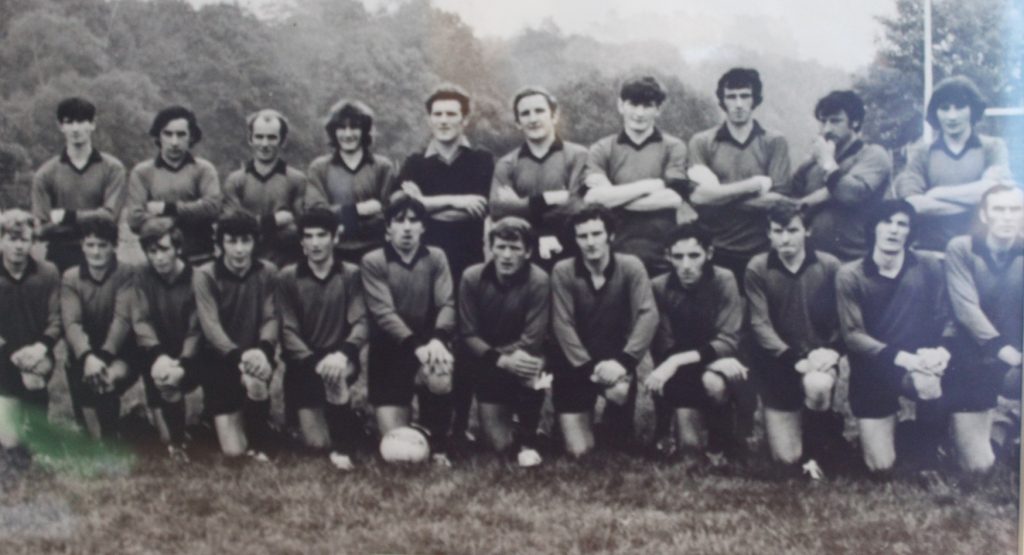 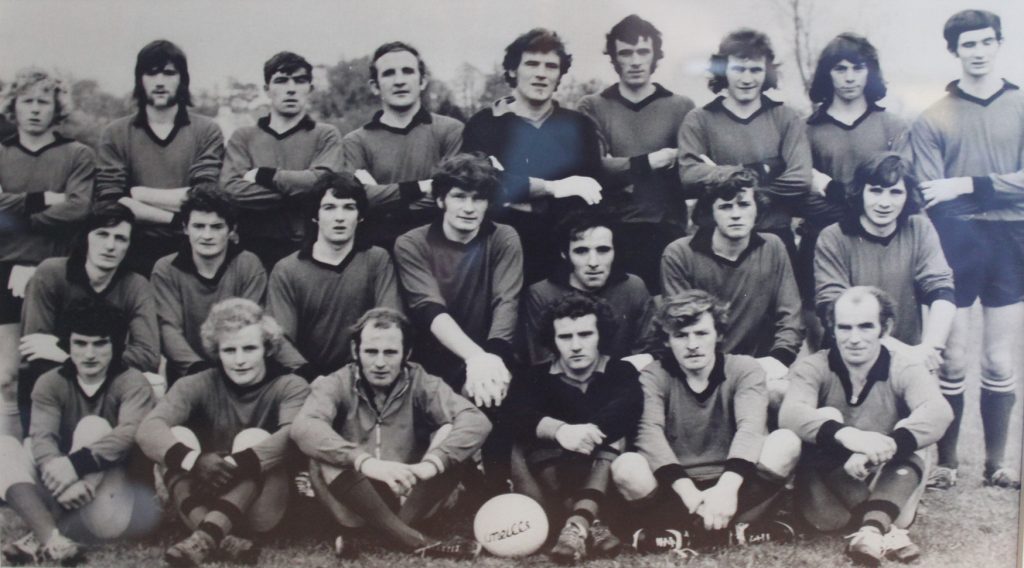 If the 1970’s could be described as a decade of success on the field, the 1980’s was the era of success for the club off the field. Land was acquired in 1979 in the townland of Lisseagh and all energies were geared towards completion of our present grounds and clubhouse. On Sunday 3rd June 1984 (Centenary Year) St. Mellans Park was officially opened. This was a great testament to the Club and the people of Truagh far and wide who worked tirelessly to fundraise and to give generously. At adult level our only success was in the Junior B League (Hugh Brady Cup). Our Seniors were relegated to intermediate football in 1981 but bounced back to the senior football ranks the following year. We remained in senior football until 1988 where again relegation was our fate. A very important feature of this decade was the work done at juvenile level by a hard working committee lead by Dermot Treanor and others. In the early 80’s the McGrane (U-13) and Lee Bros. Cups (U-15) were won and other finals were reached. These were our first juvenile successes since the 1970. Seamus Sherry then lead the juvenile charge in the latter part of the 80’s winning 5 more juvenile titles and reaching a minor championship final. Truagh teams at juvenile level were now reaching and winning finals on a consistent basis, which can be seen in our roll of honour, and this tradition has continued ever since through the efforts of many hard working members

The Club remained in intermediate football through the early part of the 90’s. After reaching the the Intermediate Championship Final In 1992 we were relegated the following year to Junior Football. However the Junior League was won in 1994. The Reserve Div 3 League and Championship was also was won. In 1995 the Intermediate Championship was won for the first time. Senior status lasted 2 seasons before being relegated. In 1998 the Hackett Cup was won and again we were back again in senior football. Our U21s won the Kerley Cup (U21 Div 2) on three occasions, 1992, 1994 and 1997. 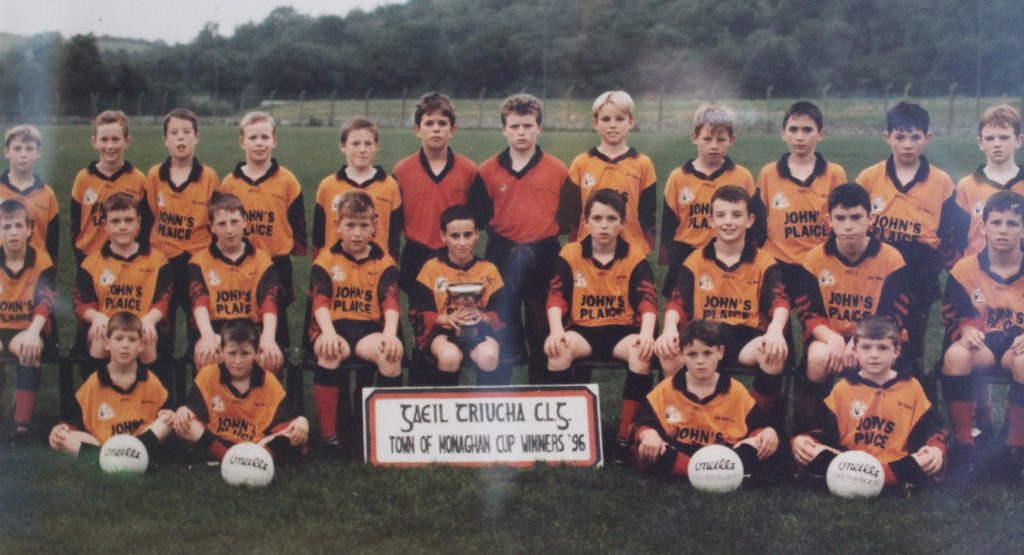 In 2000 our seniors reached their first senior championship final and followed that up with a second appearance in 2001. Both teams were unsuccessful, losing both finals to a fine Castleblayney side who were kingpins of club football in that era. In 2000 our reserves won the Div 1 League (Brennan Cup). In 2004 we reached the Owen Ward Cup Final (Senior League) but unfortunately came up short against Latton. Our U-21s won the Kerley Cup for the fourth time in 2002. In 2006 we again joined the ranks of intermediate football, but bounced back in 2008 to senior level by way of victory in the McAviney Cup (Intermediate League). We had great success in minor grade when Gaeil Triucha won the Fergal Shannon Cup (Div 1 League) in 2009.

In 2010 another fine minor team produced some great football. Hopes were high that we could achieve minor championship, however that team had to settle for a Div 1 League title, which was a great honour in its own right. The following year in 2011 the holy grail at minor level was achieved when our minor squad defeated Clontibret to win the (Minor Championship) for the first time. This was another prestigious first for the club. During this very successful period for that age group another Kerley Cup was won in 2010. However there was great disappointment for our senior squad when they were relegated in a very tight league. 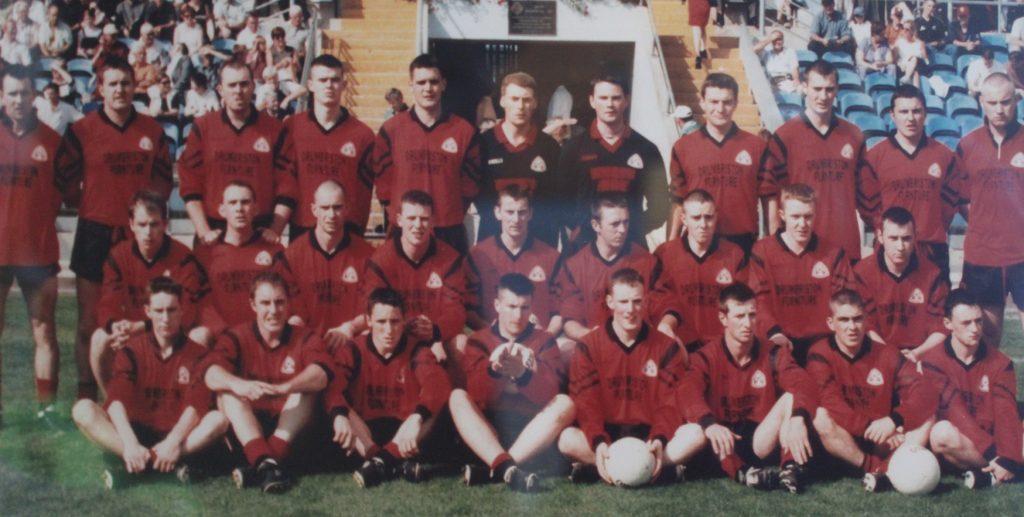 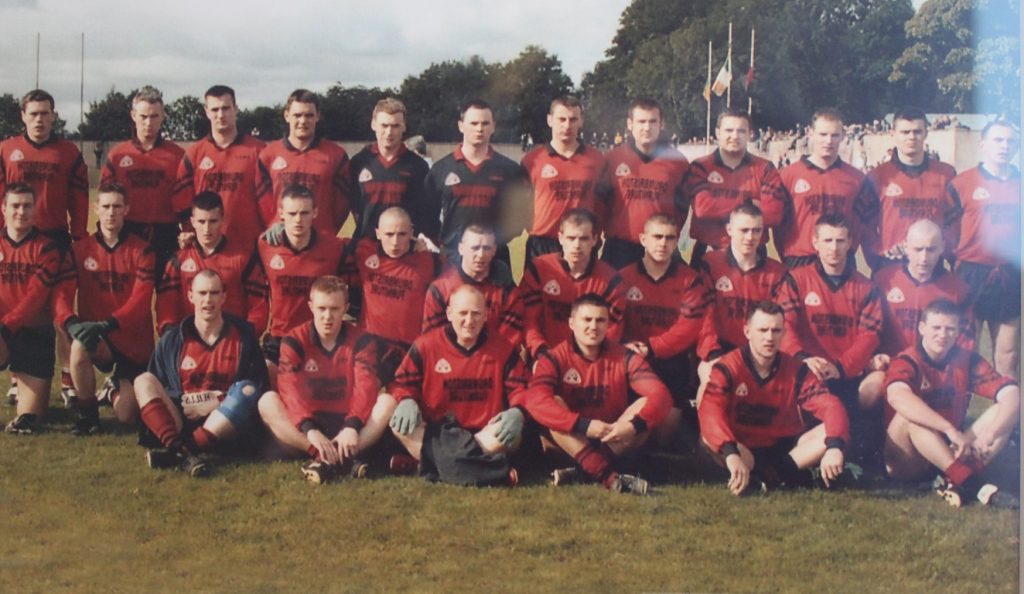 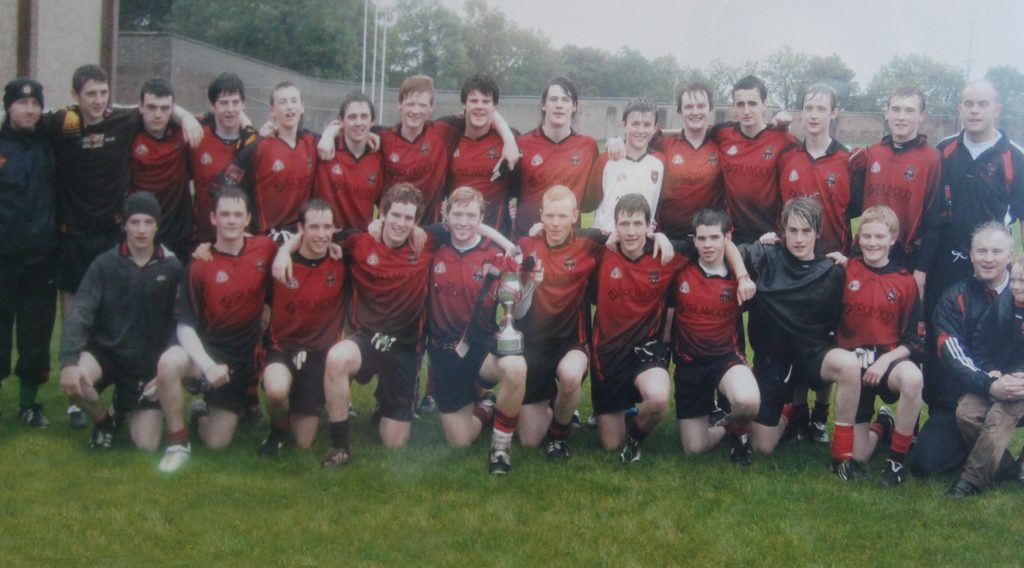 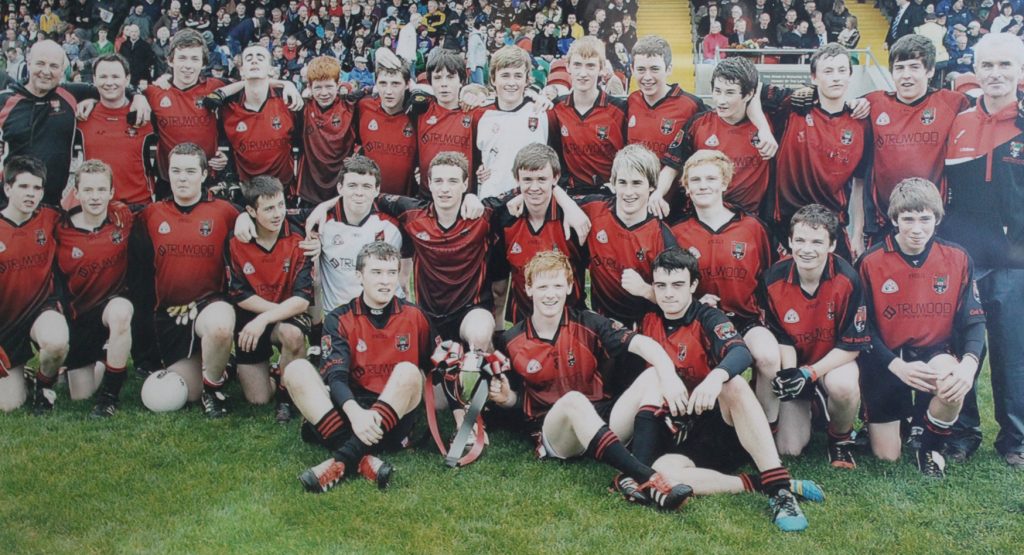 In 2013 optimism was high that a that a good year was in store and our intermediate squad didn’t disappoint. We reached both the league final and the championship final. First we defeated Tyholland to win the (Intermediate Championship) for a third time. In the league final we didn’t perform on the day and lost to Currin. As Monaghan Intermediate Champions we were now involved in the Ulster series. We were now going in to the unknown but our players responded magnificently. Drumgath (Down) and Foreglen (Derry) were beaten to reach the Ulster Final where we faced a strong Eskra (Tyrone) side. The lads in red and black prevailed on a wet night in Armagh and we were now in an All-Ireland Semi-Final. We faced Geraldines (Louth) in Crossmaglen and in an entertaining game Truagh emerged victorious by 3 points. On February 9th 2014 Gaeil Triucha faced Kiltane of Mayo for the All-Ireland Intermediate Title. On an emotionally charged day Truagh secured victory on a score of 2-21 to 2-13. This victory was a credit to the players and management team, but also was a testament to the hard work and perseverance of past players, committee members and supporters many of whom have reached their eternal reward. The magnificent surroundings of Croke Park where victory was achieved was a far cry from our humble beginnings in March 1958.

After the dizzy heights of Croke Park our players had to get back to basics in senior league football and again responded with great maturity. They consolidated their senior status in 2014 and reached the senior league final in 2015 before losing to our neighbours Scotstown. Our minor team won the Div 2 League Title in 2014 and in 2015 reached the Minor Championship Final before losing narrowly to Donaghmoyne. Our U-21 team won the Div 1 Championship for the first time in 2013.

We have achieved some notable victories in 2016. Our Reserve B squad won the O’Duffy Cup (Reserve B Div 1 Championship) for the first time. Our U-21s also collected silverware by virtue of winning the Div 2 Championship.