THIS ARTICLE WAS WRITTEN BY THE LATE MASTER OWEN SMYTH R.I.P. IN 1965, WHO TAUGHT IN KNOCKCONAN NATIONAL SCHOOL

It was also included in the book that was published for the opening of St. Mellans in 1984. 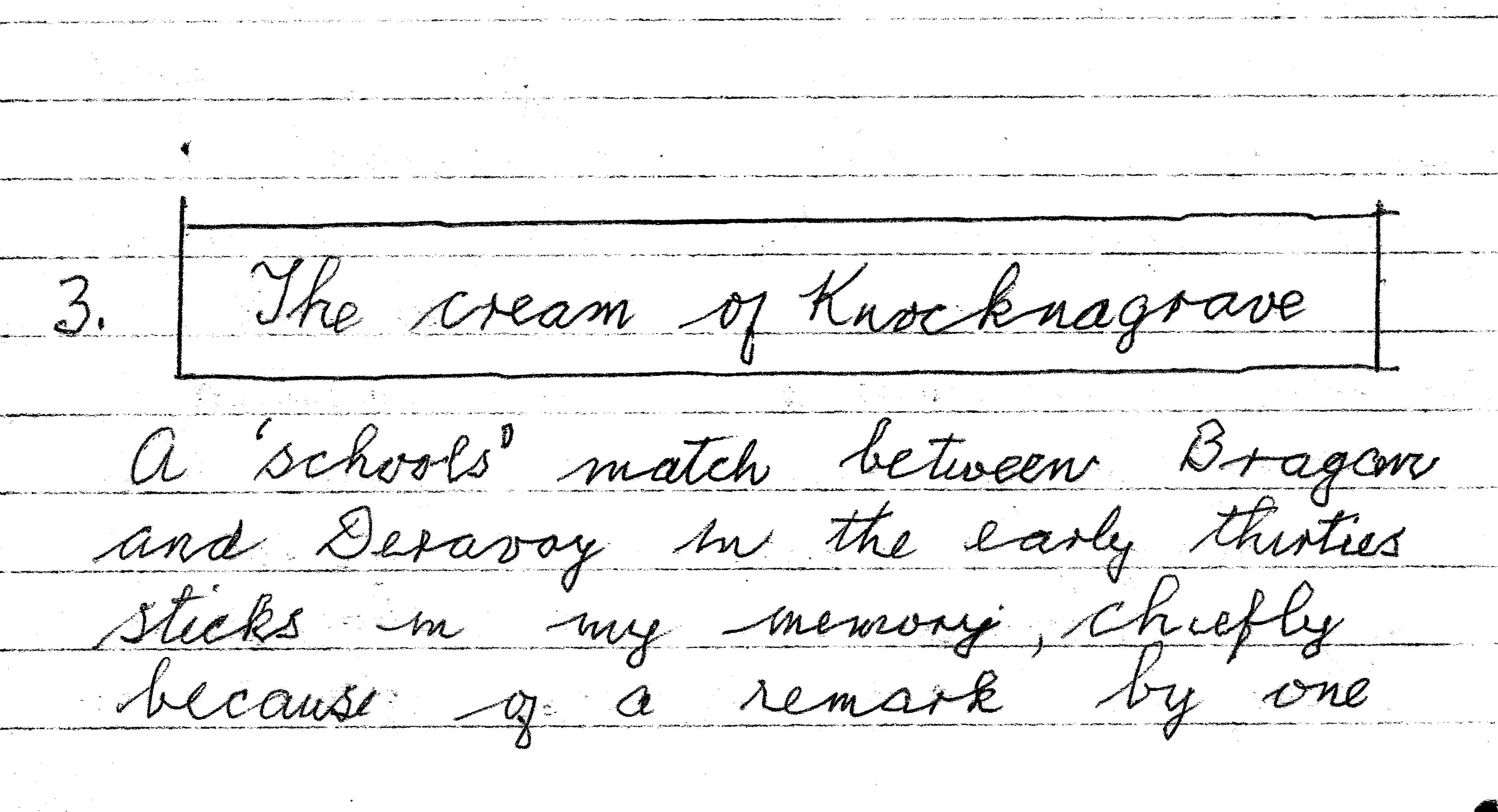 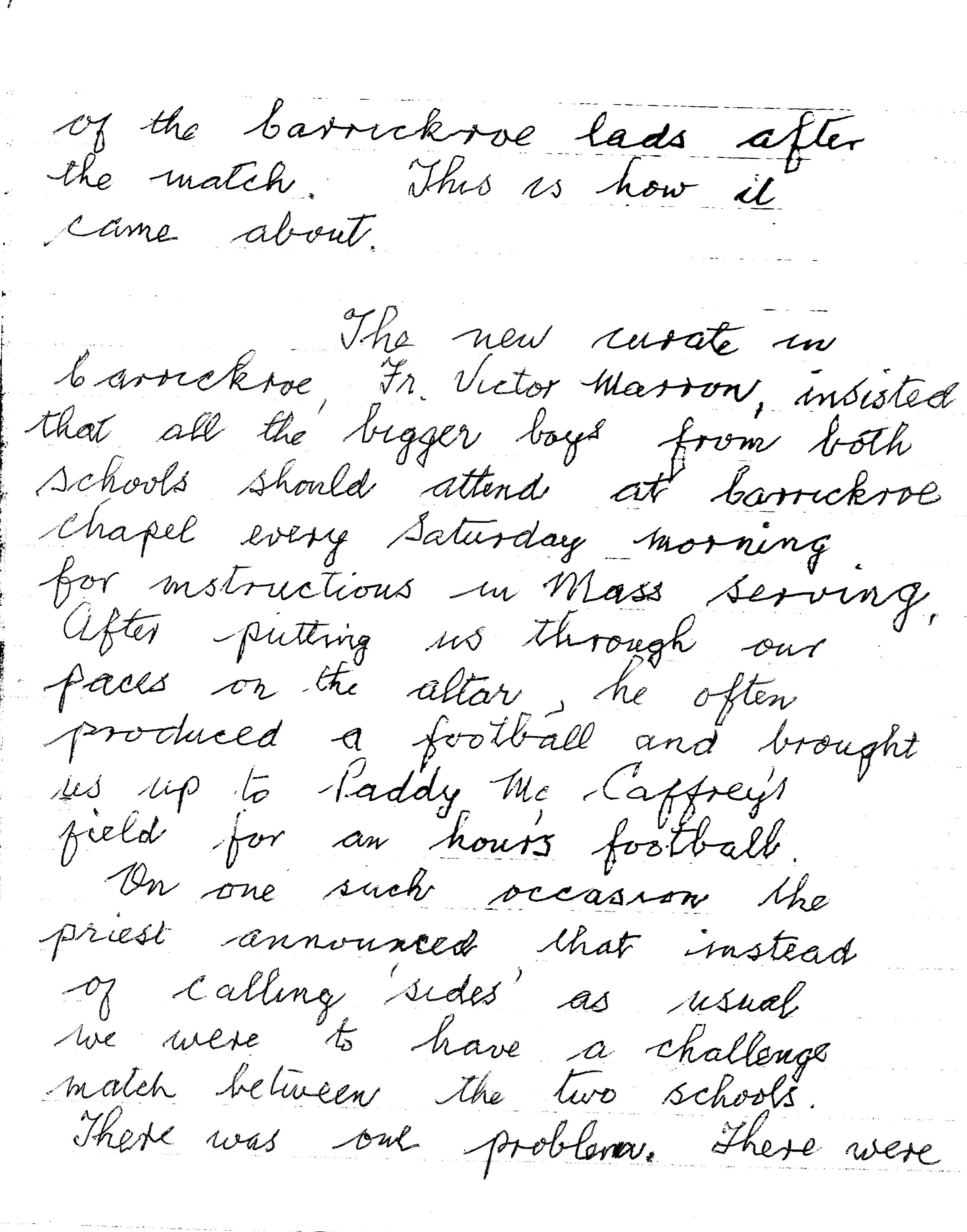 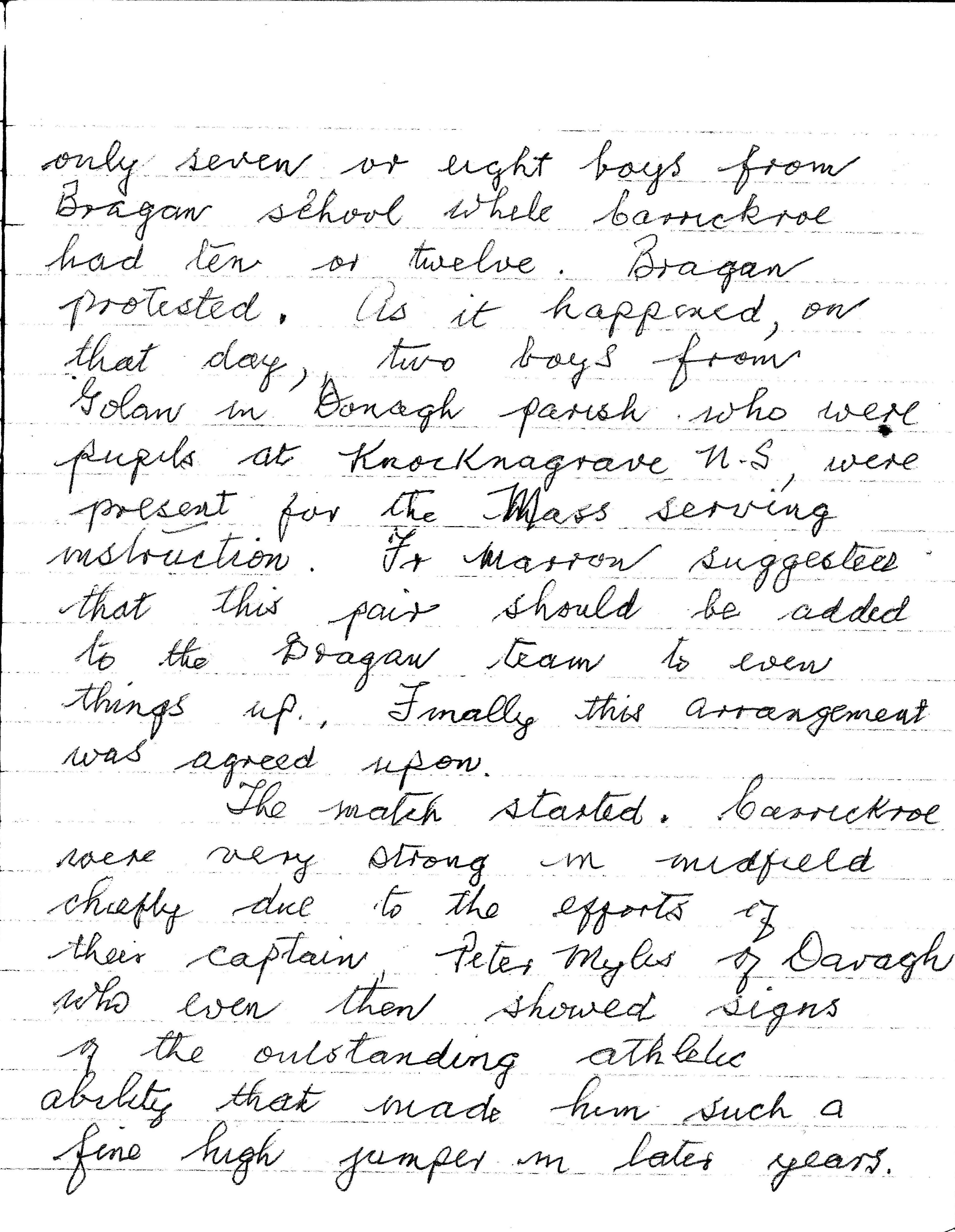 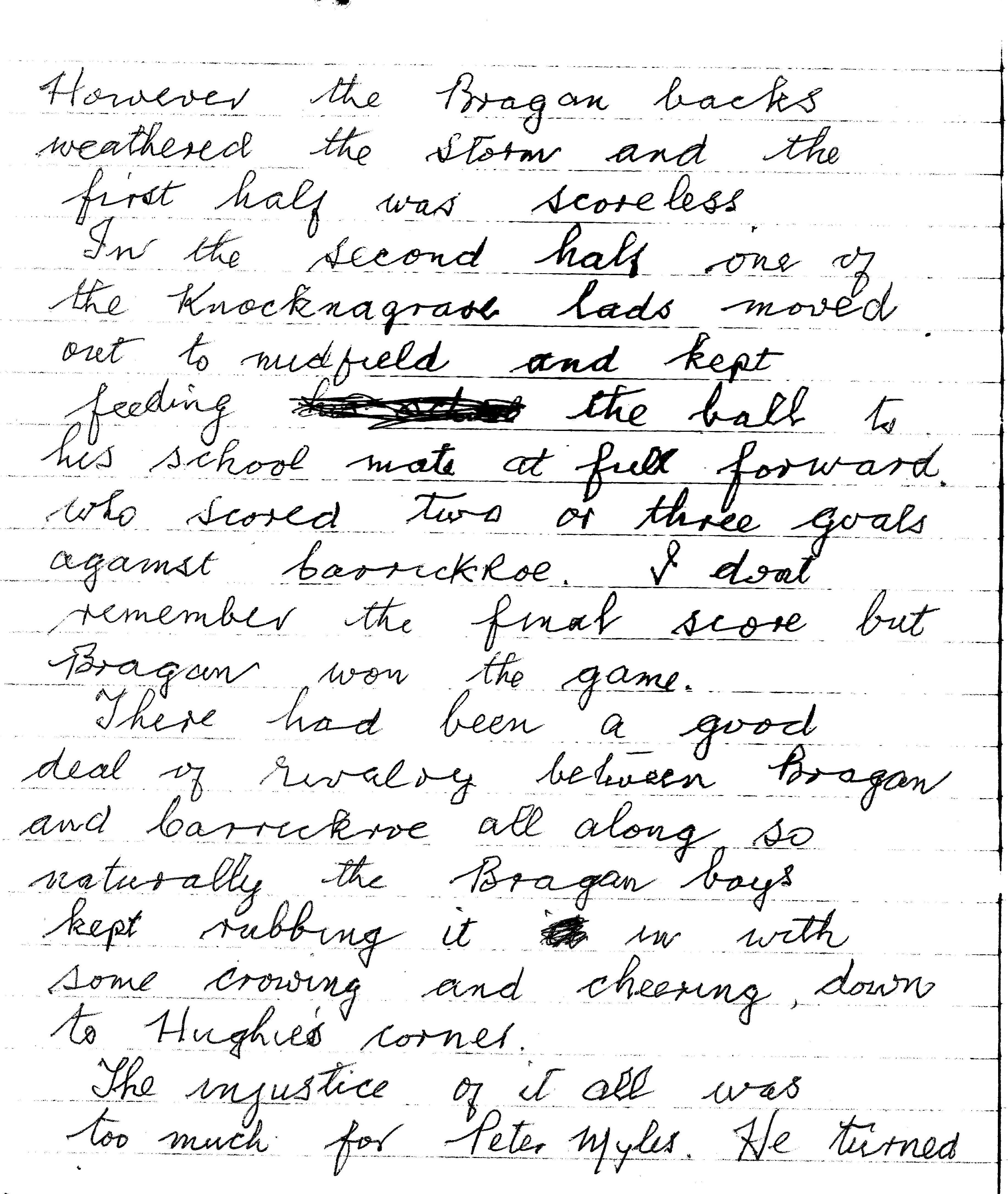 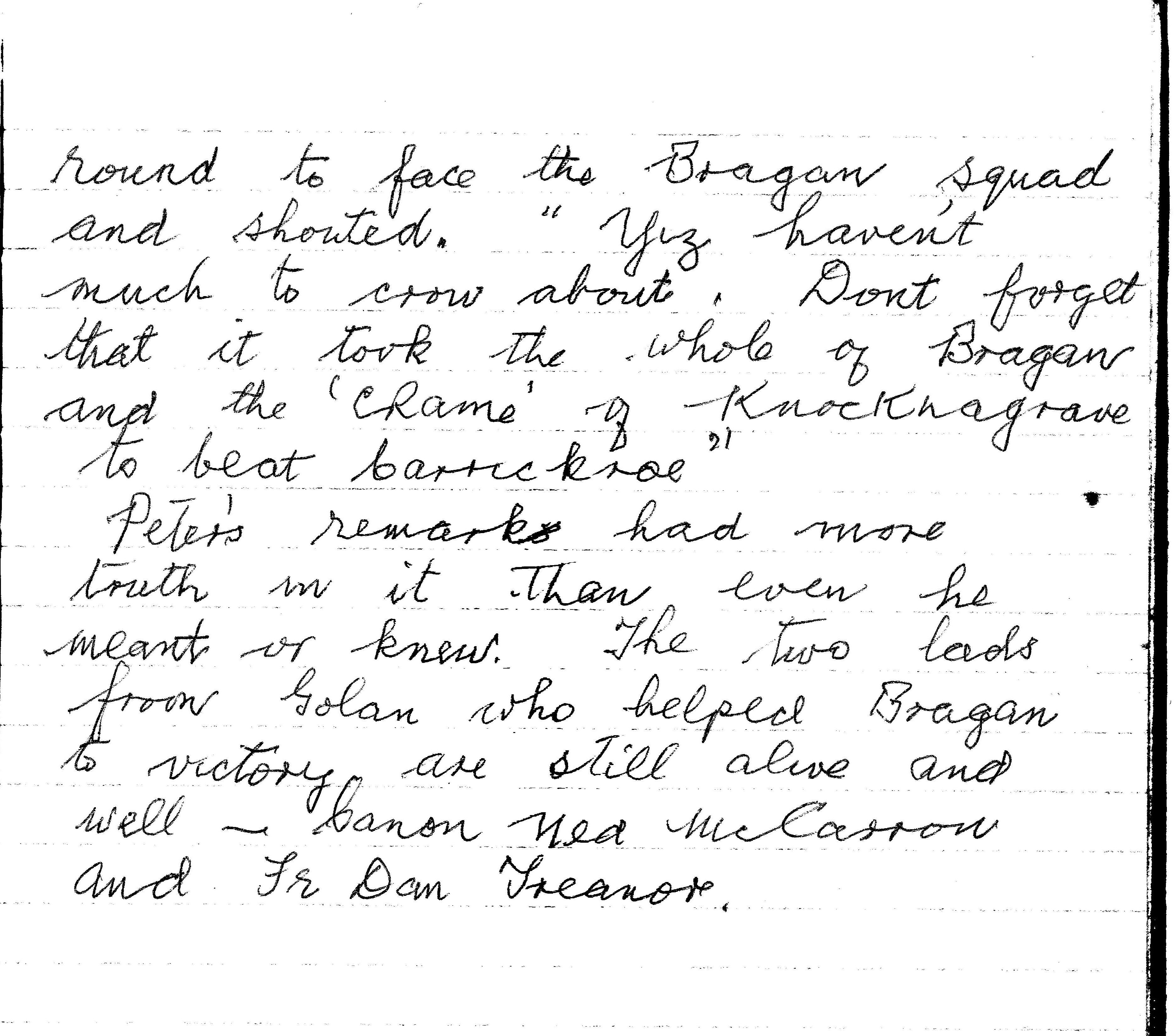 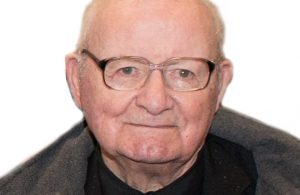 Tom was born in Corduff in 1927. After finishing National School he went to St Macartan’s College and from there to Maynooth. He was ordained a priest in 1952 and his first appointment was as curate in Ederney. He served there for seven years and then came to Carrickroe. During his time in Truagh parish Fr Johnny Crudden was the PP and Fr Tom Breen was curate in Clara. They were a rare team, two big strong men, each with a great workrate and a great love of Gaelic football. Tom Marron got together the first underage team to represent Truagh as a parish. It was an under-16 team which did quite well. A few years later,Fr Breen, with others got together the first Truagh Senior team

After his time in Carrickroe, Fr Tom went to Magherarney and then to Roslea. From there he went as PP to Tempo from 1982 to 2002. He retired as PP in 2002 and helped out in Trillick as a retired priest until his death.

Fr Tom was always a man of the people. Wherever he went he was much loved. When there was work to be done he threw off the jacket and collar, rolled up the sleeves and mixed mortar with the best of them. He had the great skill of remembering names and knowing everybody in the area.

He started and coached Camogie teams in most of the parishes where he worked. He played for Monaghan County seniors as a young man. He was at times a fanatical supporter on the sideline, often using words you might not find in the dictionary.

First and foremost he was a dedicated, hardworking priest. He was a friend of the poor and a searcher for the lost sheep. In many ways he greatly resembled the Lord himself. Ar dheis De go raibh a anam uasal.

I was very interested in playing football from a very young age.  There had been a football team in Clara since the 1920’s and I began playing with this team probably in the late 1930’s.  I remember playing with Kevin and Vincent McKenna (Larry) who were two great footballers.  John Carbin, Owen McKenna (Jack), Jim Hagan, Peter Macartan, Cathal McKenna (Frank), Peter and Jimmy Sherry, Philip O’Neill, Willie McKenna (The Master), Mark McElroy, Barney McVicar (Tammy), Hughie Rice and many others whose names I forget played for Clara.

At that time Arthur Finnegan arranged everything, we just had to turn up.  There was no such thing as training, we cycled everywhere and we were fit enough.  Arthur Finnegan was a teacher in Amacklin School and a Fine Gael Councillor.  We were in the Semi-Final of the Junior Championship one year, we played Currin at Gavan Duffy Park.  For away games we travelled on Matt or Peter Treanor (The Bakers) lorry.  We played in the field where Clara School is now.  It was very hard to get a good field in those days.  I remember playing in a field somewhere with rushes cut a few days beforehand and the stumps would cut the legs off you.  It’s a miracle there weren’t more injuries.  I do remember Sean Canavan (Peter’s father) getting his leg broken at Ballygawley.

The Clara team split up mostly I think to do with politics and most of the team went to play for Aughnacloy.  I played for 5 or 6 years with Clogher but during those years I also played for Aughnacloy, Emyvale, Brantry, Ballygawley and Tydavnet.  They would come and pick me up.  I don’t know if I was affiliated to any of them.

That time there was a lot of Tournaments.  I played with a Clogher team in a tournament which was played in a field opposite Glencull School in Ballygawley.  We played Derrylaughin first and were beaten.  I then played for Ballygawley.  I played for Emyvale in the final and met the Derrylaughin team again and was marking the same fellow I had met in the first game.  He asked me had I not played for the Clogher team earlier.  I told him “that was my twin brother and we’re so alike even our mother doesn’t know the difference between us”.  I doubt if he believed me.

In 1958 Fr. Tom Breen who was a curate in Clara decided to try and form a Truagh team, taking in the players who played for Clara, Carrickroe and Mullan.  This team was called Truagh Gaels and I was the first captain.  I remember some of those early players from that team – Owen McKenna (Faravig), Gene Treanor (James John), Sean McQuaid, Barney Treanor, Sean Finn, Paedar and Packie McGeough, Benny Connolly, Pat Carbin, Gene Owens, and many others.  We played at Shanco.  We cycled to the matches and changed behind trees and in Mrs. Corrigan’s house.  This was our playing field and sports field until 1984 when St. Mellans was opened.

I played for a short time on this team as I hurt my leg while playing Scotstown in Monaghan.  I was attending Dr. McCord who wrapped a tight bandage around my knee.  I had torn ligaments but there wasn’t much word on how to treat it.  Every time I played my knee was very painful and I had to give up the football.  I had been playing for about 20 years at this stage.  As the years went on a lot of young fellows joined the Truagh Gaels and there was a good juvenile squad who went on to be a great team.  They were a joy to watch in those years.