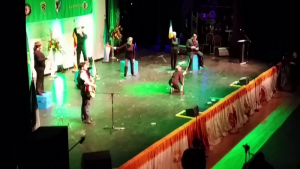 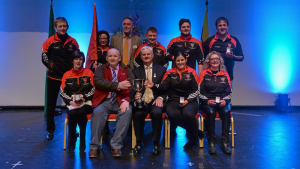 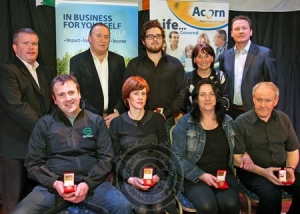 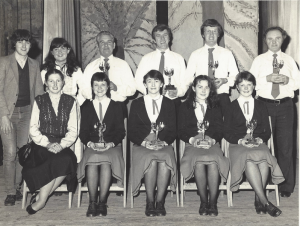 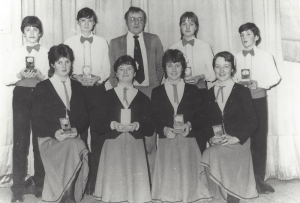 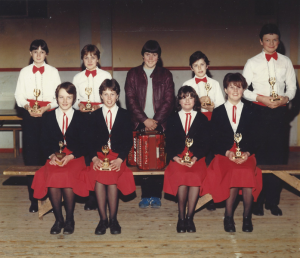 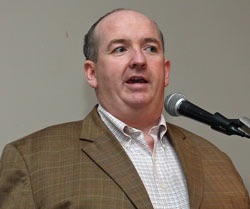 The first tentative steps of Truagh into Scor Competitions came in the winter of 1971.  Truagh acts reached the county final without success for a number of years.  In 1972 the inaugural Scor na nOg competitions were held.  Truagh were winners in Instrumental Music, Solo Singing, Ballad Groups, Novelty Act and Recitation.  Other County Titles came our way but we had to wait until 1979 for Provincial Success.  Bernadette McKenna with her rendition of “Urchnoch Chein Mhic Cainte” won the first Ulster Title for Truagh and Monaghan in Scor na nOg, and came a close second in the All-Ireland Finals.  Truagh Set Dancers started to dominate in the late 70s and early 80s in both Senior and Scor na nOg competitions winning county titles on a regular basis.  After our first Senior success in Set Dancing in 1981 other senior titles were captured in Instrumental Music, Solo Singing and the late Eugene Flood in Recitation.  Among the main driving forces in the 70s and 80s in Truagh Scor were Fr. Corrigan and Josie Brady among many others.

In the following years Truagh continued to compete a high level in Scor Competitions.  In 1995 Paddy Flood won county and provincial titles in Senior Scor Recitation.  In 1996 and 1997 a very talented Ballad Group – Olivia And Louise Beggan, Caroline McKenna, Bernadette Fox and Sandra McKenna won County and Ulster Titles, coming 2nd two years in a row in the All-Ireland Finals.  A few years later another talented Ballad Group – Melissa Meehan, Jennifer Kelly, Carol Treanor, Una McGinnity and Breda Treanor reached the All-Ireland Finals after winning County and Ulster titles.  Other county titles were won during this period including Novelty Act wins in 1997/98.  Teresa Daly RIP and Mary Begaan were two of the main organisers of Scor during this period with help from many others.

In 2012  a big effort was made to enter teams in all categories of the now 3 Scor Competitions – Spraoi Scor, Scor na nOg and Scor Sinsir.  This has proven to be a very successful era for Gaeil Triucha.  Spraoi Scor success has been achieved on a regular basis.   Mattie Flood has been successful at county level in Recitation while our Ballad Group are County Champions for the last 2 years.  In Scor Sinsir Gaeil Triucha Novelty Act/Leiriu won the County Title in 2014 with a Patrick Kavanagh inspired piece.  However the ultimate achievement came this year in 2016 when ” A Terrible Beauty” written and directed by Paddy Flood won Monaghan, Ulster and All-Ireland Titles.  This Leiriu Act was inspired by events of 1916.  The finals were held in Killarney and on the night our Leiriu put on an inspired performance to take an All-Ireland Title back to the club.  There were great scenes of jubilation in Killarney and on their return to St. Mellans.
The winning team comprised of Mark Skinnader, Mickey Corrigan, Dennis O’Hagan, Therese McKenna, Brian Clinton, Ciara King, Majella Connolly and Clare McMeel.
Mickey Corrigan and Ciara King have been the main organisers among others in this very successful period of Gaeil Triucha Scor.